The symbols of the Empire are many and varied. These symbols include the national flag and the Imperial seal. In addition, each colony is represented by its own distinct flag. All images displayed here may be reproduced freely elsewhere provided they are accompanied by proper attribution and a link back.

The Aerican flag is among the most distinctive and recognizable in the world. With its bright red bars over a white background and a smiling face in the center, the Aerican flag conveys the Empire's vastness while retaining its sense of humour. For official government purposes, a particularly extravagant and ceremonial version, seen to the left, is often used. For most common purposes, a simplified version, seen to the right, is used.

The official coat of arms of Aerica is a red and yellow striped shield on a white background, with a smiling face embeded in the central yellow. The motto beneath reads "Mundi est ridiculum; Custodiunt illud quod modo," which loosely translates as, "it's a silly old world; let's keep it that way." 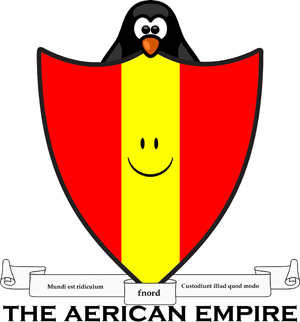 The official seal of Aerica is a white background with a yellow smiley face, with the letter A in the top left and the letter E in the bottom right.

Each colony of Aerica stands united behind the flag of the Empire, but as each has its own unique culture, so too does each have its own flag.